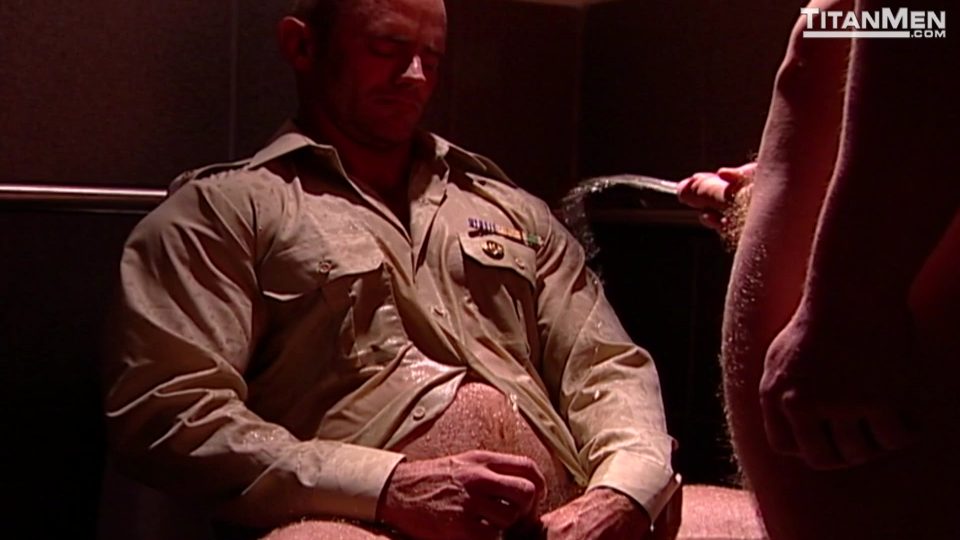 Lean, smooth and uncut Mason Wyler springs a big ol’ hard on watching his fellowcadet, hot blond Tory Mason, doing chin ups. The two young horndogs decide tocompare cock size, so Tory unbuckles his pants and pulls his dick out of his jock strap. They start pulling on their cocks until they’re both rock hard and then proceed to stroke each other. Hot studly muscle daddy Brendan Davis watches from behind a door as his two cadets lube up and stroke their dicks. When he suddenly barks “What are you guys doing?!” the two startled cadets salute the captain with their cocks standing at attention. Since it IS a cock-size competition, after all, Brendan gets out a ruler and measures their stiff rods, massaging their balls and stroking their cocks to get them as hard as they can be. He gets down on his knees and goes back and forth between their two dicks, sucking, slobbering and stroking them while Mason and Tory rub his shaved head and pull him down onto their throbbing poles. After the expert cocksucking, the two cadets jerk their dicks and spray their spunk all over Brendan’s tight uniform shirt.Brendan resumes command and orders the two cadets to pull his dick out of his pants and suck it, and they quickly obey. Mason’s the first to swallow it, choking and gagging on Brendan’s cock as he deep throats it. Brendan pulls his shirt and undershirt off, revealing his ripped abs and bulging tattooed pecs. He orders Tory down on his knees and the two cadets take turns sucking the captain’s hard cock as they massage his huge pecs and pull on his quarter-sized erect nipples. Mason and Tory jerk their throbbing cocks as Brendan furiously face fucks them. Mason gets a condom and slides it over Brendan’s stiff pole, and Brendan promptly bends Tory over 3 a table and cracks his ass open, flips him on his back, throws his legs over his thick, broad shoulders and continues to pound his tight muscular butt while Mason watches and strokes his own huge cock. Brendan orders Mason onto the table and slam fucks his tight round bubble ass while Tory strokes his dick and blasts off a load as he watches Brendan tear into Mason’s hole. Mason shoots his load onto his tight torso and Brendan rubs it in, then pulls out of Mason’s greasy ass and sprays a hurricane of cum all over Mason’s feverishly hot body. Ending the scene, Brendan’s sitting on the toilet in nothing but his uniform shirt unbuttoned to the waist. Despite sporting a raging hard on, Mason’s able to hose Brendan down with a hot jet stream of piss that soaks Brendan’s pecs and abs. Brendan sprays piss all over his own thick, muscular torso.