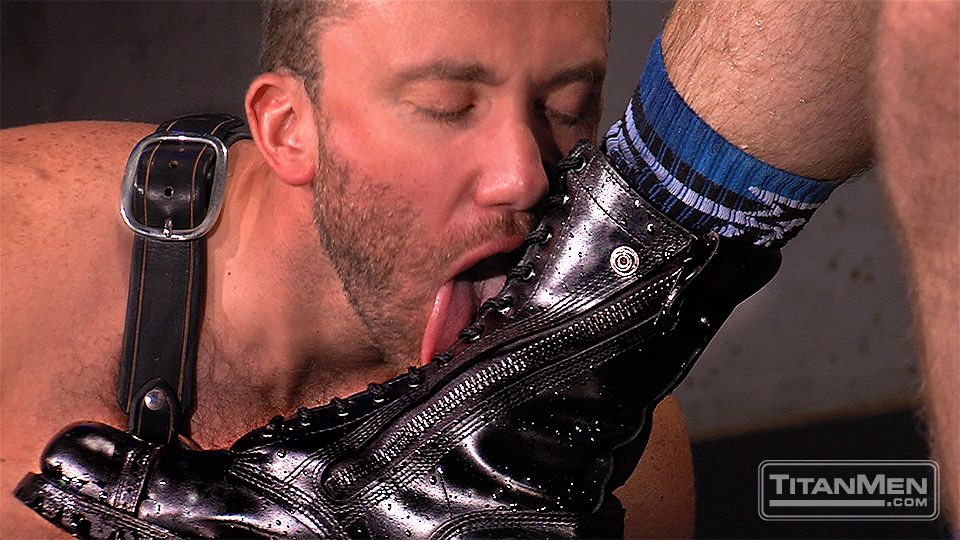 On his knees with his toned, hairy bod hugged by a harness and jockstrap, handsome Nick Prescott gets to work cleaning the boots of furry Aleks Buldocek—who sits above him, calmly issuing orders. “Shine with that spit,” says the stud as Nick licks his boots, brushing them before whipping out his dick and pissing on them—then bending down to lick it up (“Love those boots,” says Aleks). The alpha stands up to give Nick his reward—taking out his cock and pissing all over the hottie. “That’s it boy…drink it up!” Nick dives down on the big cock, working it up as he gulps (“Spit on it! Get back on that!”). Nick spits up at the surprised Aleks, who flashes a smile through his beard before spitting back down. “Fuck yeah, boy,” he says. “Pull on those balls!” Nick complies, tugging on Aleks’ sac as he worships the beast before engulfing his nuts. Nick gets face fucked before bending over, fingering himself as he gets eaten. Aleks fucks him from behind, gripping the bottom’s harness as he goes faster. With Nick on his back, the two piss all over him—firing into his mouth from their boners. Aleks fucks him some more before the two shoot.