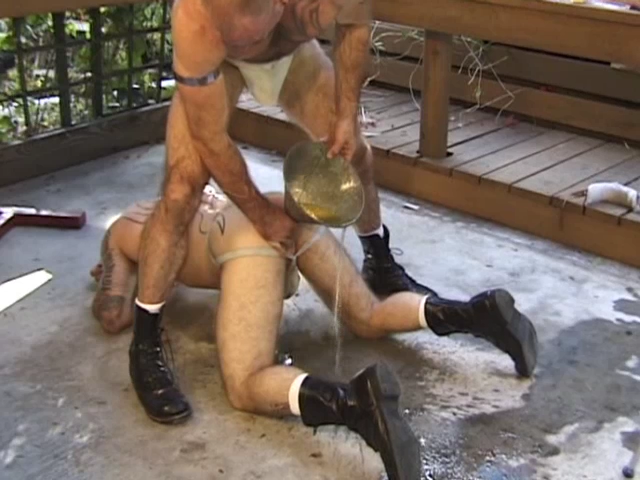 Jackson Price and Brian-Mark are caught trying to steal Wyatt Trash’s bike from the park. Wyatt and Daddy Joe catch the two thieves and throw them in the back of their pickup. When they get the two back to their place, they tie up Jackson and Brian-Mark and proceed to piss all over them. Jackson gets the worst of it as his shirt is torn off, while Rob Edwards and Daddy Joe soak him down. As the piss runs down Jackson’s body, Brian-Mark is there to slurp up any piss that tries to reach the ground. Bud see’s little piss big Brian-Mark bending over and decides to take his sweet ass for a ride. BrianMark gets fucked hard by Bud, while Brian-Mark sucks on Jackson’s dick. And Jackson is still tied to the pole! Things get really piggy when Wyatt pulls out a funnel and sticks it in Bud’s ass. Wyatt and Daddy Joe fill Bud’s ass with hot piss. Bud then bends over and squirts the piss from his ass into Brian-Mark’s eager, open mouth.